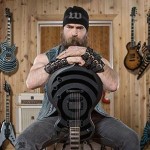 In one of the recent interviews, Zakk Wylde revealed that we could soon expect a new Black Label Society album!

So we are waiting impatiently for new stuff of Zakk and the company!