Scorpions will return to Poland this year! 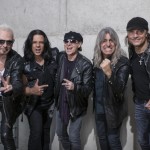 Scorpion will return to Poland this year!

They recently performed at the Tauron Life Festival Oświęcim, and it is now known that they will return to Poland for a concert this year!

Scorpions is a living legend of world rock. After the success of the 50th anniversary of the uprising and the phenomenal performance at the Tauron Life Festival Oświęcim, the Scorpions once again set off for concerts scheduled on both sides of the Atlantic. Rock giants will also perform at the Ergo Arena on the border between Gdansk and Sopot. So on December 1st we have a good dose of good rock!

During their spectacular 50th birthday, Scorpions visited Poland last March. Tauron Arena Krakow has garnered several thousand fans. Similarly, a few days ago, during the Tauron Life Festival Oświęcim. The band in Poland is extremely popular, there are a lot of devoted fans here and it gathers the audiences. Therefore, there is no doubt that rock star performances will again attract crowds of fans who will wind up with “Wind of Change” with Klaus Meine and sing other iconic hits such as “Rock You Like a Hurricane,” “Send Me an Angel,” and ” Still Loving You “.

At the end of the year, there is a good dose of good rock music. Scorpions will perform on December 1st in the Ergo Arena in Gdansk / Sopot. Tickets for this event can be purchased at tickets.imprezyprestige.com and eBilet and at Empik stores nationwide.