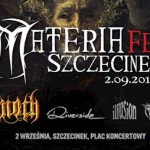 Already in September in Szczecinek will be held the 6th edition Materiafest, during which will perform, among others Behemoth and Riverside!

Materiafest is an event organized by the band Materia, which is known to polish metal fans and more metalheads around the world. The group has so far released two albums, but is currently finishing work on the third album.

On 2nd September in Szczecinek will be held 6th edition of Materiafest, during which outside the team Materia we will see other excellent bands. This time at the event will be perform: Behemot, Riverside, Illusion, Spatial, Koronal, Retrospective and Shinigami.

Tickets are available for sale from 40 PLN at this address: