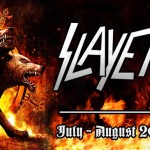 On July 12th, Slayer, Lamb of God and Behemoth are begin a monumental North American tour. Unfortunately, due to personal reasons, drummer Behemoth will not be on tour.

Fortunately not for health reasons or other problems. As officially announced Behemoth team, Inferno will not go on tour due to the birth of second child. The drummer will remain at home to spend time with his family and therefore refrain from participating in the tour.

As we read in Behemoth’s statement:

“Behemoth Legions!
We must announce that our drummer, Inferno will not be taking part in the upcoming Slayer tour with Lamb of God:

“I am going to be a father for the second time in my life and it is going to happen in July of 2017. I therefore must apologize to all our fans for not being able to participate in the 2017 Summer North American tour. That Jon Rice, an amazing drummer, a truly experienced musician, and a good friend of ours, will flawlessly take over my drum throne and will set the stage on fire! “- Inferno

As much of a disappointment it is not to have our brother with us, we completely support Inferno in this amazing chapter of his life. Rest assured, we’re still bringing one of them to see our North American, Legions in full force! “

We’re congratulate Inferno, and wish a Behemoth a successful tour alongside the legendary Slayer and Lamb of God!